DOMA Cases are being reviewed 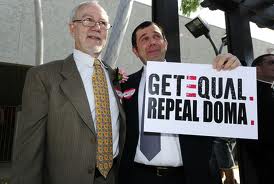 Edith “Edie” Windsor, who sued the government for failing to recognize her marriage to her late spouse, Thea Spyer, asked the U.S. Supreme Court today to hear her challenge to the so-called “Defense of Marriage Act” (DOMA).

In June, a federal district judge in New York ruled in Windsor’s favor that section three of DOMA unconstitutionally discriminates against married same-sex couples. The Justice Department and the leadership of the House of Representatives recently asked the Supreme Court to hear DOMA challenges in two other cases, including a case, like Windsor’s, that is still pending in a federal appeals court.

“With Edie’s case and the two others, the high court has before it striking illustrations of the many different harms that DOMA inflicts on many thousands of married same-sex couples all across the country,” said James Esseks, director of the ACLU Lesbian Gay Bisexual and Transgender Project. “Edie and Thea got married after making a life-long commitment to each other, and it’s just wrong for the government to pretend that they were legal strangers.”

Windsor and Spyer lived together for more than four decades in Greenwich Village. Despite not being able to marry legally, they were engaged in 1967. In 1977, Spyer was diagnosed with multiple sclerosis, and Windsor helped her through her long battle with that disease. They were finally legally married in May 2007.

When Spyer died in 2009, she left all of her property to Windsor. Because they were married, Spyer's estate normally would have passed to Edie as her spouse without any estate tax. But because of DOMA, Windsor had to pay more than $363,000 in federal estate taxes. Payment of the federal estate tax by a surviving spouse is one of the most significant adverse impacts of DOMA since the amount owed, as was true in this case, is often quite substantial.

“Edie Windsor, who recently celebrated her 83rd birthday, suffers from a serious heart condition,” said Roberta Kaplan, a partner at Paul Weiss and counsel to Windsor. “Because the District Court’s ruling in her favor is entitled to an automatic stay of enforcement, Edie cannot yet receive a refund of the unconstitutional estate tax that she was forced to pay simply for being gay. The constitutional injury inflicted on Edie should be remedied within her lifetime.”

“The impact of DOMA is felt most dramatically today here in New York,” said NYCLU executive director Donna Lieberman.  “At least 10,000 same-sex couples have been married in New York since our marriage law went into effect. But DOMA subjects gay and lesbian married New Yorkers to a form of second-class citizenship. All married couples should have their marriages respected by the federal government, once and for all.”

In the meantime, Windsor will continue to defend her victory before the U.S. Court of Appeals for the Second Circuit, which has agreed to hear her case on an expedited basis.

More on this case can be found at the ACLU website.